Is Sodium nitrate (NaNO3) an acid or base or neutral?

Sodium nitrate appears as a white crystalline solid having the chemical formula NaNO3. It is an inorganic nitrate salt of an alkali metal. It is readily soluble in water and uses for the production of fertilizers, glass, solid rocket propellant, etc. Sodium nitrate is non-flammable and used as a strong oxidizing agent.

In this article, we will study Is Sodium nitrate(NaNO3) an acid or base or neutral?

Is NaNO3 an acid or base?

NaNO3 is neither an acid nor a base. It is made from the neutralization reaction of the strong acid, namely Nitric acid (HNO3) with a strong base, namely Sodium hydroxide (NaOH). The pH value of the aqueous solution of NaNO3 is 7. Because strong acid and a strong base will neutralize each other effects and a neutral solution forms.

Why is NaNO3 not considered an acid?

“Acid is a substance that can release hydrogen ions when dissolved in aqueous solution and have a pH value less than 7.”

Sodium nitrate contains one Na+ and one NO3– ion, it doesn’t contain hydrogen ion(H+) or proton which is essential for the acidic nature of the compound. The absence of hydrogen ions in the NaNO3 compound leads to no protonation(proton transfer doesn’t take place) when dissolved in water.

As we know “pH is the measure of the amount of hydrogen ion or hydroxide ion in water”. More the number of hydrogen ions in solution, high is the acidic nature of that solution.

In order to be acidic, a substance must contain a hydrogen ion that can release into the water solution.

Also, we have two famous Acid theories to check whether the compound behaves as an acid or not – Arrhenius acid theory and Bronsted-Lowry theory.

It tells that a substance behaves as an acid when it releases some proton in an aqueous solution.

Sodium nitrate doesn’t undergo hydrolysis since it is the salt formed from the neutralization reaction carries out between strong base(NaOH) and strong acid(HNO3).

Note: This type of salt that is made from the neutralization reaction of strong acid and strong base, does not undergo hydrolysis because the ions of these salts have no tendency to react with H+ and OH– ions of water. And if react, then they formed the compound which dissociates again completely in an aqueous solution.

As a result, there is no change in the concentration of H+ and OH–, hence the solution remains neutral.

Ok, NaNO3 is a salt that does not release H+ ions in water solution, so there is no point it can categorize an Arrhenius acid.

Let’s assume, that NaNO3 undergoes hydrolysis and is split into ions(Na+ and NO3–), these ions react with H+ and OH– ions of water, and are formed (NaOH + HNO3).

But the problem is, NaOH is a strong base, and HNO3 is also a strong acid, hence they undergo complete dissociation and once again split into (Na+ and OH– ions) and (H+ and NO3– ions), as a result, there is no change in the concentration of H+ and OH– in solution. They are equal in numbers.

Hence, there is no effect on the pH of the solution, if these types of salts made from a strong acid and strong base(i.e. NaNO3) are dissolved in a water solution.

It tells that substance behaves as an acid when it donates a proton to another compound and forms a conjugate base.

Once again, sodium nitrate doesn’t have any proton to donate to another species or compound, hence NaNO3 is also not categorized as Bronsted-Lowry acid.

Why is NaNO3 not a base?

NaNO3 is also not considered a base because it doesn’t contain any hydroxide ion(OH-) which is the identity of any base compound.

Also, as per Arrhenius’s base theory, a base is a substance that furnishes OH– ion on dissolving in an aqueous solution.

NaNO3 neither has any OH– ion nor its ions undergo hydrolysis to produce OH– ions. Hence, it does not act as a base according to Arrhenius’s base theory.

Also, as per Lewis’s base theory, a base is a compound that has a lone pair or electron pairs to donate to another compound.

In the case of NaNO3, the central atom(nitrogen) doesn’t contain any lone pair of electrons, so it is not capable of “donating the lone pair to any compound”. Hence, it does not act as a Lewis base also. 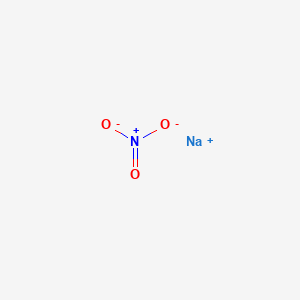 Why is NaNO3 neutral salt?

In chemistry, salt is a substance produced by the neutralization of acid compounds with base compounds. Salt is made up of a cation(base) and anion(acid), the bond between cation and anion is ionic, hence it is also called an ionic compound.

Now, Why NaNO3 is neutral salt in nature? NaNO3 is a salt because it is made up of the neutralization of base (NaOH) with acid (HNO3), and it is neutral because the nature of base and acid is strong.

The concept of acid-base neutralization reaction:

Acidic salt is made during the neutralization of strong acid with the weak base, acid salts produced an acidic solution after being dissolved in a solvent. The acidic solution has a pH value of less than 7. Examples – NH4NO3, NH4Br, NH4Cl, etc.

Basic salt is made during the neutralization of a strong base with weak acid, base salts produced a basic solution after being dissolved in a solvent. The basic solution has a pH value of more than 7. Examples of basic salt – Na2CO3, NaF, NaCN, Soap, etc.

Neutral salt is made during the neutralization of a strong acid with a strong base. The neutral solution has a pH value equal to 7. Examples of neutral salt – KCl, NaCl, KNO3, KBr, NaBr, etc.

What makes the aqueous solution of NaNO3 neutral?

A neutral aqueous solution has a pH value equal to 7 which means it holds neither acidic properties nor alkaline properties.

Or you can say NaNO3 is the conjugate base of strong acid and conjugate acid of a strong base.

⇒ A strong base produces a very weak conjugate acid.

⇒ A strong acid produces a very weak conjugate base.

You can even assume the Na+ and NO3– ions as a spectator ions as they don’t take part in chemical reaction when NaNO3 dissolved in water.

The ions of NaNO3 are too weak in nature to hold the property of either acidic or alkaline since they are unable to function as acid or base in water solution.

Hence, the pH of water doesn’t change when NaNO3 is dissolved, and this makes it aqueous solution neutral in nature.

Sodium nitrate also referred to as chile saltpeter, nitrate of soda, or soda niter is a crystalline compound and has two crystalline structures trigonal and rhombohedral. The mineral form of sodium nitrate is known as nitratine, nitratite, and soda niter. In this article, we discussed the nature of NaNO3(acid or base or salt) with all explanations. At last, we are going to take an overview of this article with the help of some bulleted points.

My name is Vishal Goyal and I am the founder of Topblogtenz. I hold a degree in B.tech (Chemical Engineering) and have a strong passion for the life sciences and chemistry. As a highly qualified and experienced chemistry tutor with 4 years of experience, I possess a deep understanding of the unique challenges that students often encounter when attempting self-study in the field of chemistry. I have created this website as a comprehensive resource for those who are seeking guidance and support in their chemistry studies. I have brought together a team of experts, including experienced researchers, professors, and educators, to provide our readers with accurate and engaging information on a wide range of chemistry and science topics. Our goal is to make complex subjects like chemistry accessible and understandable for all. I hope you find the information and resources on our site helpful in your studies. Let's connect through LinkedIn: https://www.linkedin.com/in/vishal-goyal-2926a122b/